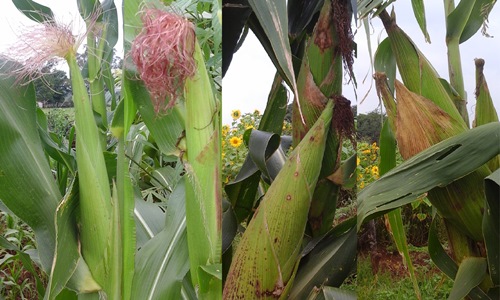 We are not talking about GMO Frankenfood here...

Certainly one of the most controversial crops on earth, mostly because of the serious Frankensteinian nature of commercial strains and hybrids. Do not touch the silk before harvest. Yes, it feels real soft and cool, like silk, but those are the female privies, leave them be. This includes walking or running around in a maize field in flower, as you inevitably brush the silks with your clothes. The slightest disturbance to the silk prevents the seed from forming, each silk strand is one seed’s origin.

Harvest according to intended use. A ripe, sun cured cob destined as seed stock, will have lost all its silk. A young cob ready for the pot, will have soft, dry silk.

A soft cob meant for soup or stew will have shrivelled but not completely dry silk. This varies very slightly over strains, practice on your own.

Preparation of your harvest is recipe-dependent. The silk, however, is kept in paper bags after flat drying on absorbent cardboard or cloth. The cob leaves are best saved on the cob, but prolonged storage of unstripped cobs risks mould and fungus. Once dry, the seed can be pushed off the cob by hand and some effort. Start with a twisting action, like when you give an Indian Burn on someone's arm. Do this until the seeds start falling off and you have a starting point for your thumbs to start kneading the rest of the pips off. Plant the best ones, eat the rest.

The silk is a recognised diuretic. Eating it fresh leaves a tactile aftertaste; it is like removing the last strands of someone’s wig from your gums. The starchy kernels are not necessarily healthy, and the GMO varieties have been proven dangerous. At Greenpets, we grow only Heritage Seed. It is serving us well enough, but I suspect pollen contamination from my neighbours' GMO Frankenfood hybrids.

The way Home to here:

THE OTHER THINGS WE TALK ABOUT ON THIS SITE

Buy This, Own That.