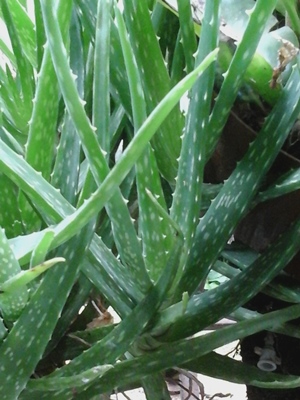 All the promises the beauty industry make about Aloe Vera, are understated.

Aloe Vera seems to come in two varieties. We grow the soft green Madagascar sort. It hardly grows knee high, hardly makes a thorn, and the few teeth on the leaf edges are quite soft and harmless. It almost completely lacks the super-bitter coloured layer under the skin that all other aloes seem to have. Mature leaves have vivid white stripes running lengthwise, but almost no more thorny edges.

Missus Aloe deserves true respect. We never rip at our plant; we stand amongst the plants, we explain our need in specifics, and we ask for a leave. The first leave that presents itself as mature and ready, is then pulled with a firm twist, but not ripped. If the leave comes off easily, we take it, thank the plant, and leave. If it does not release, we ask pardon for being greedy, and ask the entire community again, imploring, even begging until we receive a leaf. Violence against Aloe Veras damage them.

Aloe leaves can be carefully squeezed like toothpaste tubes. Break off the outer shell as you move up the leaf. If done well, a thin, clear and sticky juice will flow out. Too much pressure may release a bit of green sap, which is not ideal. The juice also starins easily through a tea strainer. Even though the juice is very sticky and snotty, there is no need to wash it off, it just rubs into the skin like so much expensive skin cream, with no odour or residue.

We do not grow the infamous variety kept as secret slaves by the American military in a secret facility in New Mexico. It turns out the military really are researching aloe for use on radiation burns of the skin. They are not hunting down other people illegally growing it, though, but the myth is worthy of the power of this plant. Any skin condition that needs to be protected from outside, can be covered with a thin layer of the leaf juice. The juice quickly dries to a thin, invisible, non-sticky skin. It is not recommended for festering conditions, as we prefer those to open up and dry out, rather than seal them up to breed further. The juice is almost not bitter at all, making it much more palatable than Aloe Ferox. The belly-soothing properties have been proven, but as a bitter, Ferox will do better.

The way Home to here:

THE OTHER THINGS WE TALK ABOUT ON THIS SITE

Buy This, Own That.